Key content:
Recent data suggest that TNFi decrease radiographic spinal progression. Whether this also applies to progression of sacroiliitis is unclear. This cohort study investigated the association of radiographic sacroiliitis progression with TNF inhibitor (TNFi) treatment in early axSpA patients. 301 patients included in the german GESPIC cohort with at least 2 sets of radiographs over 2 years were analyzed. 28.9% of the patients received treatment with at least 1 TNFi during the entire follow up period. Having received treatment with a TNFi for >12 months in the previous 2 year interval was associated with a decreased sacroiliitis radiographic score in the following 2 years period as compared to non treated patients. This was confirmed in a multivariate analysis. However, treatment with TNFi in the current 2 year period did not result in a difference compared to no treatment.

Relevance:
The study confirms previous findings of an effect of TNFi on radiographic progression in axSpA, not only in the Spine (syndesmophytes) but also in the sacroiliac joint. The fact that the reduction was only seen in patients treated with TNFi in the 2 years previous to the analysis is compatible with a slow progression rate. Over time the slowing of radiographic progression of axSpA will likely result in better functional outcomes, however this needs to be shown in future studies. 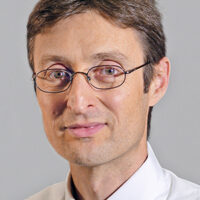